What a Weekend at Watkins Glen!

We are happy to be back racing in the states and this weekend could not have gone better, 2 wins out of 2 for Greg and the team in the Lotus 91.

Race one Greg found himself starting in 5th place but put in a brilliant drive to take the top step of the podium, after the first three laps Greg had managed to fight his way through the pack to take 3rd place. Once a podium position was secure it was time to chase down the leading two of James Hagen (1982 Tyrell 011 3000) and Jamie Constable (1983 Tyrell 011B 3000). On the fifth lap Greg managed to catch up to Jamie Constable passing him which gave Greg an opportunity to chase down James Hagen, knowing Greg was in the chase of him James fought back and managed to get his lead up to 2.2 seconds at the end of the eighth lap. With the race coming to an end Greg put in the fastest lap of the race putting him only 0.8 seconds behind James and also giving him an 8 second gap to Jamie, on lap 11 Greg managed to pass James to take the top step finishing 2.9 seconds ahead of James. It was truly one of the best drives of Gregs career and it was a great spectacle to watch. 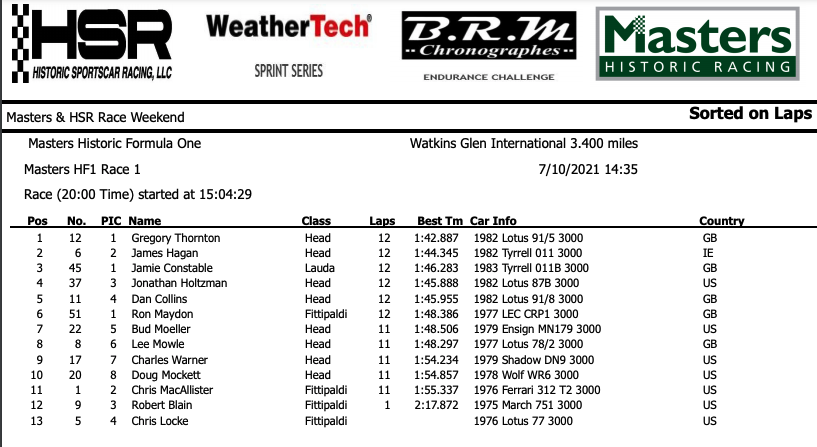 The second race of the weekend, the feature race was a very wet race seeing an incident in first couple of laps. As the race started there was a light rain in the air, but a light rain to Historic F1 cars is the same as a downpour for a normal car. This rain cause mayhem at the start when James Hagen and Jamie Constable pulled away from the pack but both hit a wet patch on the track and ended up in the wall and there was chaos behind them as well. Luckily the rest of the pack managed to lip back to the pits. After a lengthy stop so the track could be cleared we were racing again but the rain had gotten even heavier, after the rolling star Greg wasted no time in getting out ahead of the pack and taking off to a 15 second lead after just three laps over Jonathan Holtzman (Lotus 87B) and Dan Collins (Lotus 91). The rain was so bad that the lap time were a full minute slower that the pole position lap James Hagen had set the previous day. The race finished with a Lotus JPS 1-2-3 with Greg taking the top step for the 2nd time that weekend and also finishing with both fastest laps.

This coming weekend (July 15-18) we are staying in America at Road America, the Weathertech International Challenge. You can follow the coverage on the Masters Historic Facebook and Twitter pages along with everything going on that weekend.

A full report from this weekend and all upcoming events from Masters Historic Racing can be found here – https://www.mastershistoricracing.com/event-report/masters-and-hsr-race-weekend/9029/

Back by popular demand, our annual classic and race car show

No Replies to "What a Weekend at Watkins Glen!"